I like this time of the year because the temperatures are more agreeable to this crafter who grew up and lived most of her early life in hotter climes.  The only thing I don’t really like about spring is the humidity and the rain which takes care of projects involving paper.  It’s not the best time to work with the medium, because the moisture content of the air is much too high to produce optimum results.

So there will be very little, if any, working with paper crafts for me.

There are a ton of projects brewing in my head which involve sewing and refurbushing, and I might even end up trying my hand in carpentry.  I have set out to rebuild my nest.

We moved to my current apartment 15 years ago.  We haven’t really changed much except to do some repainting which now needs to be redone.  While the intention at the start was to imbue the place with “our personality”, life generally got in the way and put everything on hold.  That pretty much meant deteriorating environs and plans that remained just that: plans.

A major life change has caused me to physically move to make those plans a reality, and the strangest thing is that I’m back at working on colors.  Yes, I’m going to repaint again.  I live in a co-op which is a single level dwelling on a two-story courtyard type unit in a community of like structures.  Being that it’s a co-op, I really can’t touch the outside, but I can pretty much do as I wish with the interiors, for as long as I keep within the flooring requirement of having the place 80% carpeted.

It’s a two-bedroom unit which is now essentially mine, (master’s) and my son’s.  There is a single full bathroom, a tiny kitchen with a breakfast counter opening into a stand-alone dining room.  The structure itself was built post-war, and has seen its share of occupants through the decades.  I have an attic accessible via a folding ladder which has ample storage but which needs a major clean up.  My carpets have not been replaced although we had meant to do that early on.  My vinyl flooring is now yellowed and peeling off tile by tile, so that needs a do over as well.  Just thinking about all the things I need to get done to get my place in good shape is beginning to overwhelm me.  This might take forever.

I am not daunted.  I’m crafty and can do some of the work.  Still, I’m not deluding myself into thinking that if it has a do-it-yourself clip or article out in the web, I should attempt it to cut corners.  False economy.  You think you’re saving money by doing the job yourself when a reboot of the project later by a professional will likely cost you more.  I think it’s very important for a homeowner to know what he or she can do and what needs to be contracted out to the pros.

So for starters, I’m dividing everything that needs to be done into mini-projects that will allow me to work within my budget, and will enable me to get things moving without doing a major overhaul which I really cannot afford right now. 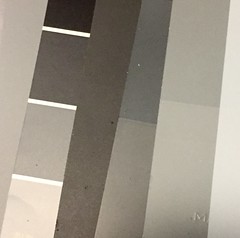 I have jumped on the “grey” bandwagon and have (for now), made up my mind to use greys and neutral tones to cover the mostly white interiors I have.  My dining room is a calm sage green, but that has already outlived its variety.  My kitchen has white cabinets which are in need of repair in a splash of funky 80s like wall paper.  My bathroom was the only room I dressed in my favorite fuschia pink, forgetting that the tiles were in midnight blue with some ghastly floral graphics here and there.  The bedroom is a warm terra cotta color which I don’t mind keeping, but which, because I’d like to mentally and physically move forward, I feel a deep need to redo.  I painted this room once before, I can do it again.  And one of the bigger projects next to the kitchen really is my living room whose farthest and most solid wall is a huge mirror which is so 80s and which I can’t wait to either cover up or tear down.  I’m thinking black with wall-to-wall shelving in white.

I just breathed an audible sigh at the enormity of it all.  But it can be done.  I’m thinking within 12 months, I would have my colors up and most of my repairs done, and then I can go from there.

One of the most difficult things about redoing your nest is deciding on the colors to use.  Again, I live in a very small space, but I want the look to have a unified feel.  My son and I were at Home Depot a few weeks back and had picked up some samplers to try on colors.  I made him choose his closet interior and I thought I’d pick up a darker grey shade to try on the window wall of my stairwell landing.  I also picked up a small tub of plain white to redo his closet door primarily to cover up graffitti someone else had scribbled on it.

My grey test wall is temporarily on hold due to some major cracks on it as well as caulking or plaster that had fallen off the stairwell molding.  That is a separate project altogether but one which I will take care of sooner than later.  And yes, I’m hiring an expert to do that because I am asthmatic and might not fare well against the dust that chipping into the crack will generate.  More importantly, while I pride myself for being a diligent and neat painter, I don’t want to attempt the wall repairs and later have to call in the troops to save the day.

Years ago, I would have said grey was too dull or plain blah.  Now I can’t wait to have it from dark to light with white trim.

So this is one big craft project for me.  Again, in little doses.  More coming on my nest repairs and other projects.. soon.