I am a novice sewist.  I used to be afraid of the sewing machine way back when we first got introduced to each other in grade school.  It was a class we called “Work Education” which was a version of “Home Economics”, a class supposed to equip us with skills to be homemakers.

I didn’t do well in sewing.  My pajama project wasn’t even anything close to just tight.  It was totally askew and was beyond repair.  I was almost deathly afraid of how the needle rattled on with a menacing continuous growl to keep going.

Many years later, I have since become bestfriends with needles.  From elaborate cross stitch projects  to actually hand sewing my pant hems, I learned how to sew neatly, giving enough room for my thread to embrace the fabric without unsightly wrinkling.  I used needles extensively in various crafts, like hair ribbons I sewed together, and even in accessories — more so in pieces where I used fabric or ribbons.

After moving to New York from Manila in 2000, I found my crafting interests growing and I explored new ways to make things with my hands.  And then upon the prodding of friends, we enrolled at a sewing class at Mood U over at Mood Fabrics .  I originally went in hoping to learn basic sewing in my hopes to sew bags and clutches in particular.  Fittingly, the first project was a tote.

Spread out over 6 weeks, I worked on getting to know a sewing machine all over again.  I thought threading the machine would be difficult, but by the time I sat in front of the one we had in class, I learned how to do it and now I do it with no diagrams or prompts.  It’s been two years since that class, and I’ve enrolled in at least one other sewing class.  This time, we made a coat.  My end product was actually pretty decent, considering my skill level.

I have always believed that anything can be learned.  At the end of the day, it really boils down to wanting to learn and embracing the process.  One of my early intentions really was that I wanted to make my own clothes.  I have never been a single size all throughout, and some part or other would need alteration.  My curvy figure makes most tops pop in places they shouldn’t.  I thought that the best solution was to learn how to make my own.

I am still learning and have started creating.  I’ve sewn one fabulous evening or special occasion box pleated skirt.  It has required a few alterations, but I have been happy with my second piece.  Right now, I’ hoping to work on some simple pieces I can reproduce I different prints.  Or else patterns can be shortened or lengthened.

I am having fun with Mood Sewciety’s  free sewing patterns which you can find here.

My learning journey as a sewist continues – a stitch at a time. 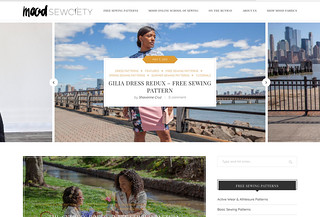