I’ve spent the better part of this past

weekend working with the second signature of my art journal, so indulge me. It’s been a difficult week and I needed to sit down and be quiet and just be. I needed to find a quiet place to retire to and just try and unwind. 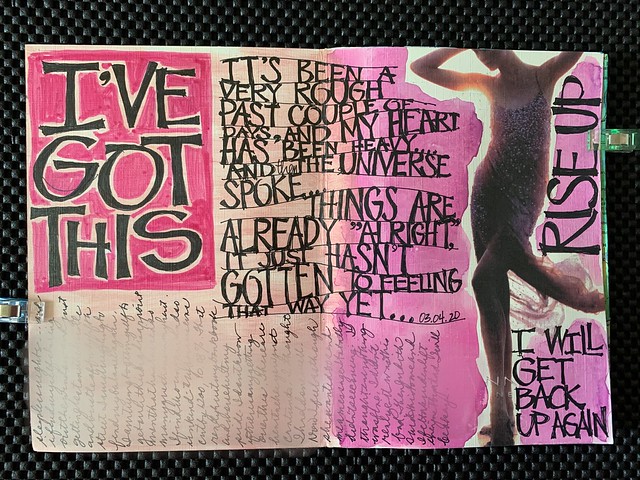 Several years ago, I picked these images in magazines that somehow called out to me. This signature shows copies of these images which I resized and used as elements in my art journal. I printed a copy of this dancing image from a perfume ad onto card stock and watercolored around it to create a background. Nothing fancy. 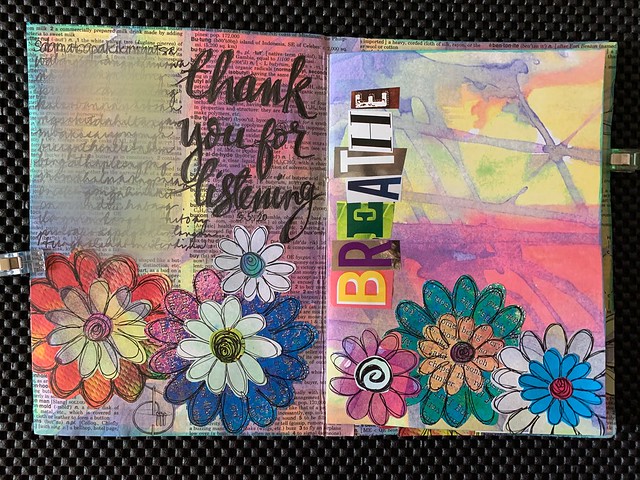 This layout covered the connecting rib between the sheet before it and the next, so I covered the spread with pages from a dictionary that had been printed with an old watercolor sheet I had done almost a decade ago. (I have to find the original sheet but am still searching.).

I have two smaller spreads within this layout which you will see on the right side. I cut out these magazine letters 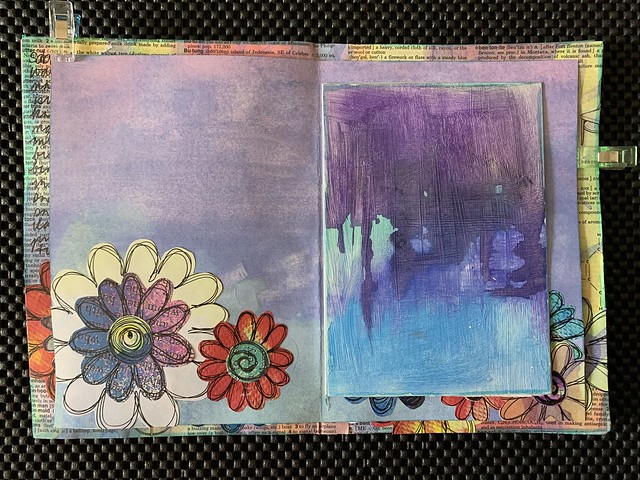 I had done a gesso experiment on ad postcards a while back, tucked them away and just rediscovered them a week or two ago in my attic. I. attached one of these to the spread beneath it with a printed adhesive backed paper you will see below. 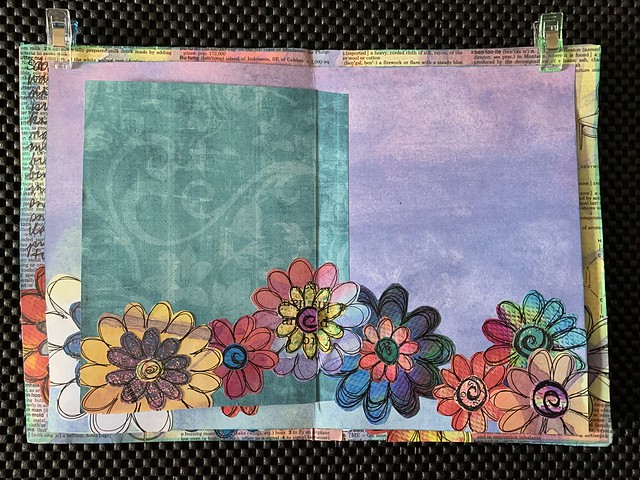 This set has been decorated with pieces from what I call my paper garden — pieces of layered doodled flowers I originally did on matte magazine pages. I have found doodling a very good way to relax and had drawn many of these flowers over a period of time. I spread them out over the three layouts within the main one to create a unifying theme. I did it in all except the gesso-ed postcard which I’m thinking might be a frame or matting for a focal graphic. 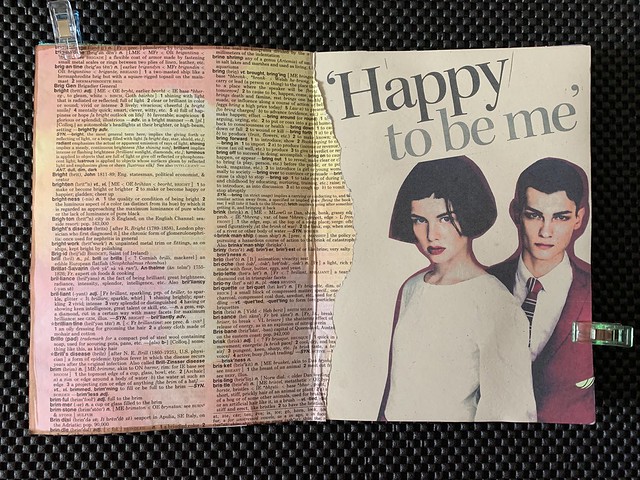 The graphics on the right are two separate magazine clippings that I just decided to compose as a personal statement. I used another watercolor background copied into a dictionary page that I tore for some dramatic effect on the left side.

The next layout shows how I joined this signature together, and I haven’t gotten to the last three spreads yet beyond how I initially assembled this group of pages.

Below, I used the graphic to hold two spreads together. It actually served as the “spine”. 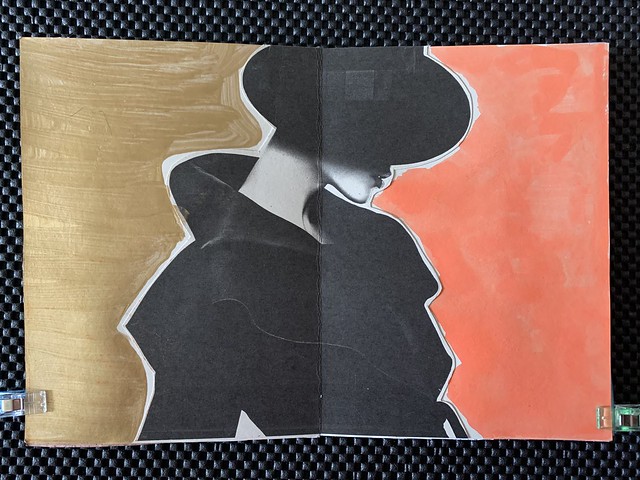 I painted the left side with gold acrylic and orange watercolor on the right side. The layout looks seamless because the graphic holds the two together.

This held the suceeding spread, where I decided to do a fold out. Below is the folded soread: 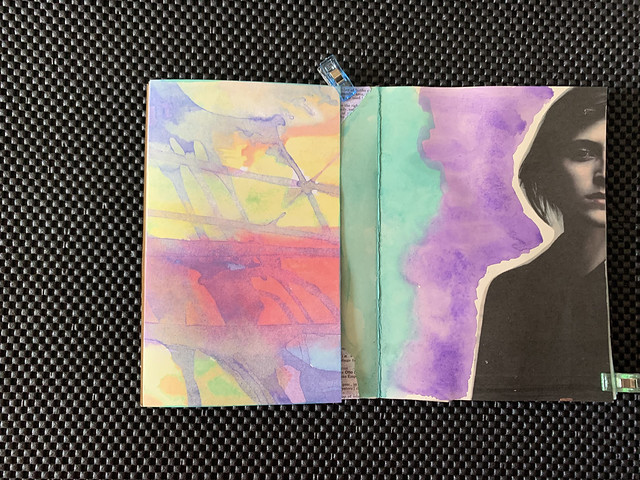 And here is the fold out: 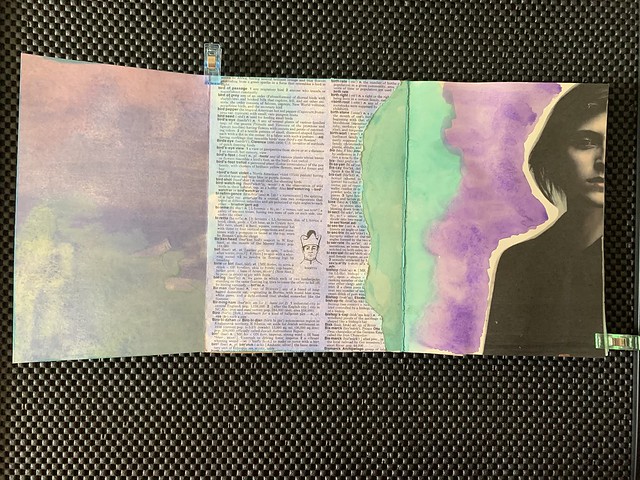 Again, I used dictionary pages over the watercolor I painted around the graphic. Extending the page was easier with a back to back print of my watercolor backgrounds which I attached to the left page. I love the reveal and having a bigger space to work on, even if I don’t know yet what’s going to be on this spread.

I did the same thing for the connecting layout between the previous and the next with a graphic serving as the spine below. 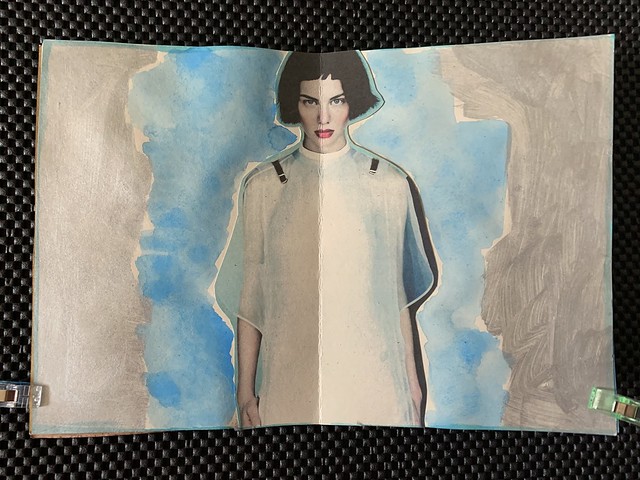 It’s part of a series of fashion spreads I took these graphics from, then I used watercolor and then silver acrylic paint for the rest of the spread. 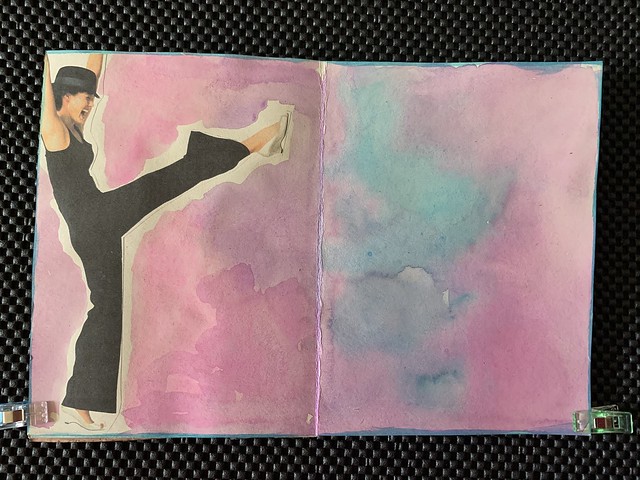 I wanted to end with this celebratory layout — so full of life and positive energy. I played around with watercolor to create the spread above. I’m going to doodle a big “Yay!” above her raised leg and haven’t quite figured out whether or not I will further embellish the rest of the layout. I actually quite like the watercolor background as is, so I might not touch it at all. We’ll see.