I’ve been trying to finish some pieces for the shop but I think I’ve been distracted by a new found interest in metal smithing — particularly working with hammered wire. It’s been very interesting.  While I had been experimenting with working with my tiny hammer and seeing how the metal wires react given the different gauges, I’ve since progressed to filing open edges which should make it safe to wear.  (You don’t want the sharp edges of the wires scratching your skin.

Hammering wire has a different design effect from just looping the wire or handling it to take this or that shape.  Flat wires can also provide a good base finding for necklaces and maybe bracelets, although I haven’t gotten that far yet.  I’m learning that I have to count the times I hammer a particular area and the direction my hammering moves also affects the shape of the flattened wire.  While I had thought that hammering wire would thin it, it does so in a way but the expansion of the wire in a different direction actually makes it harder and sturdier.

I’m hoping to finish and post a piece or two over the weekend as I am starting to get back into polymer clay.

This time, I’m going beyond simple hand conditioning and actually rolling out the clay in the pasta machine’s thickest setting.  I’m going to “punch out” beads from these.  I’m also trying to create some bead molds.  (One of two – not bad.  The second that didn’t quite work out will become a bead pin cushion when I bake headpins.) 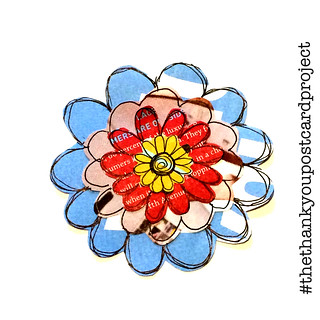 I’ve also been busy doing postcard backgrounds and flower embellishments for a postcard project in the works.  It’s something that is taking shape very slowly but requires quite a volume of pieces to take off.  I have over a hundred postcard backgrounds and maybe almost a hundred flower embellishments for starters, but this projects involves more than just my favorite pieced paper flowers.

I’m gathering my stash of background papers, bought from the store and made from prints and watercolor and other inks.  I am thinking of different ways and means to create, using up gorgeous paper napkins as backgrounds, and gathering other graphics I had created during my short stint with other art for swaps.  I’ll write more about that later.

Meanwhile, time to get back to the wire and the hammer and hopefully get a post or two up at the shop later.

Have a great weekend, everyone!

This is probably nothing new to a lot of serious crafters out there but I have experimented with this quite a bit and have found a good formula or method (in terms of timing) to press rose petal leaves.  It appears that this is crucial if you want to maintain a semblance of the petals’ original color, or keep the integrity of the petal when it dries.

I’ve used rose petals extensively for card making and as embellishment for Artist Trading Cards or ATCs, etc.  When dried and flattened correctly, they adhere easily to paper surfaces with the use of mod podge.  They lend a rustic feel to a background when used in a collage.

Let me warn you, though, that it might mean “cutting” the “vase-life” of your blooms to achieve the desired effect.  You’d have to start the process between after the bud begins to open and before it actually blooms.

I was fortunate enough to have received two elegant bouquets for my 10th anniversary at work, and one of them, the one from the big boss, had two of my favorite blooms: hydrangeas and pink roses.  The roses were of interest to me because they were not solid-colored, but graduated from pink to white towards the center.  (Craft happiness!)

I am also trying to dry the peonies which started to crumble yesterday (Day 4 from their delivery), and it shows promise, but we’ll see.

It’s approximately 6 days since the flowers have been cut and put on a vase.  The petals are still relatively fresh — no signs of wilting (as of yet).  I know from long ago that roses need to be cut at the base an inch from the tip for it to eventually bloom.  I purposely didn’t do that to preserve the rose stem “mid-bit”.

I wiggled the bud lose and started to make it easier to take each petal off.  I discarded the outer layer which has browned in some portions.

I then arranged the petals with enough space between each petal between pages of an old dictionary.

I also experimented with some hydrangeas and I”m keeping my fingers crossed that comes out nicely.  I left the book under two reams of paper to weigh it down and help press the flowers flat.  Let’s see how that comes out on Monday.