I have been busy growing my paper flower garden for months now.  I have to admit that I often “get lost” in the midst of drawing and cutting and assembling my pieced paper flowers.  I would tell myself I will sketch one sheet and I end up doing three.  I cut one piece off and I just have to cut up everything drawn on it. 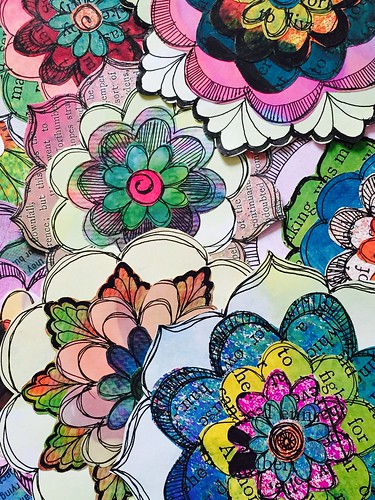 Why do I draw these flowers anyway… it’s not so much a question as a statement.  I find it very relaxing and it helps me to unwind.  At the same time, it fulfills a need to create and do something artistic even if I have always considered myself a crafter and not an artist.  I kept drawing not knowing what use I would have for these flowers exactly.  While I had started drawing them for my Thank You Postcard project which has not really gotten off the ground, I have kept on going and I’m still drawing.

Each piece is hand drawn on a copy of a background I had once created through watercolor or acrylic paint.  There are sheets of paper towels I had used as catch cloth for ink spray projects, or sheets I had used to wipe off my work surface.  Even those have come in handy and very useful.  The randomness of the way the colors got layered and settled next to each other have always been a source of wonder for me.  And then mixing up the papers through the various layers I pull together gives me a new creation each time.  Forget that the strokes and shapes I draw are the same.  The randomness of which layer goes with the next makes for a unique flower each time.

I would carefully fill empty spaces with dots of swirls and spirals to form the stamen of the flower, or that central dot from which all the petals and layers emanate from.  I just can’t stop drawing more of them in the spaces between, and every time I cut them up I end up making new sheets of flowers and so on and so on.

I have marveled at how the flower itself has gained volume even when the sheets are 2d and really one dimensional.  I guess it’s the way the flowers are sketched, or just the way I draw them.  I had gone on and on, drawing with no particular use in mind for these, until an idea hit me just a few days ago.

You purchase an original work each time you buy one of these.  They are not printed in multiples.  Each layer of each flower is drawn individually, cut and pasted onto the next layer.  Developing these designs has been a continuing learning process for me.  I have seen my first attempts grow into something more fluid and more naturally drawn.  While variations have been difficult to come up with, they are slowly but surely finding their way into the designs.  One at a time. 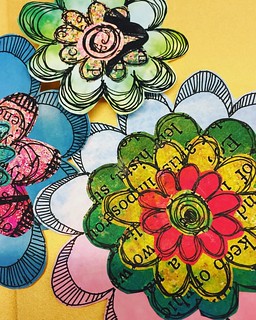 One part I like about the holidays most is the wrapping of the gifts. This year wasn’t all that much because Angelo had picked smaller toys, and we really didn’t have many gifts going out. I had postponed my holiday giftgiving to after Christmas, being that we as Catholics, do the Feast of the Three Kings which is another excuse to give gifts. I only have a few I’m putting together, so it won’t be much.

I hate having to throw away good giftwrapping paper, though, more so when they have those cute designs. For my own gifts, I stick to the regular green, red, silver or gold giftwrappers. I am trying to get rid of my stash of several years which I had acquired at a post holiday season sale at IKEA. I had bought some 10 rolls of at 25% the original selling price. January is always a good time to buy holiday wares because everything is being pushed out of the store for a song.

I’ve been busy putting my craft corner in order, and while I am nowhere near finishing, I think I did major progress sorting things out, and one problem I have is that I put away stuff to cut or punch at a later time that the best way to get rid of them is to actually do what I had intended to do in the first place.

I had a beautiful holiday gift bag that had held a present from a friend with gold and white striped tissue in in it. Two sheets. I usually fold my gift bags and had to get rid of the tissue when an idea struck me. How about trying to do pom-pom type flowers? I thought I’d give it a try, and I ended up with a half dozen or so “blooms” like the one pictured below.

1. Fold the paper tissue into two, then fold further into a width that would accommodate your paper punch. I had used a rather wide mega punch so I ended up folding the two-fold into three.

2. To achieve the pompom effect above, I used a multi-flower punch and you can see the original shape below with a view of the back of the flower:

3. I ended up punching a dozen (6 x 2) and I moved the batch by a 1/8th inch turn clockwise to make the flowers separate.

4. I then stapled the whole bunch together and fluffed the petals to form the pompom.

These, I will use sooner than the coming holidays, but if you have a lot of pompoms, you can store them in a jar or a shoe box to avoid them from getting flattened, or you can punch, move the petals to “alternate” but not fluff and store flat.