I always greet the new year with optimism, because it always brings in a new beginning.  In my mind, no matter how chaotic or tumultuous or completely bland the year that just ended was, there is that forever hope of things getting better, more so as we restart the clock so to speak.

I’ve been ramping up my creative streak of late and can happily report that I have managed to finish a winter hat, a pair of hand warmers (only because I don’t have an existing pair of the ones I did last year!) and my embroidered scarf is almost “almost there”. 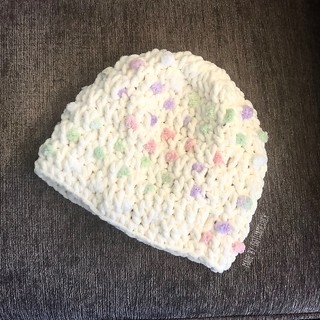 Yet another slouchy beanie.  I have spools and spools of yarn that are begging to be knitted or crocheted, and in the midst of tidying up, I actually came across a few skeins of pompom yarn that I had meant to work with as an embellishment to a white or black slouchy beanie.  Even if it took forever and a day to decide between using black or white for the actual beanie, the process of actually crocheting the hat was rather easy because I worked with an existing pattern.  Then there was the actual figuring out of (1) how to incorporate the pompoms, and (2) the placement between stitches — or how close or far I would put them together.  But voila! 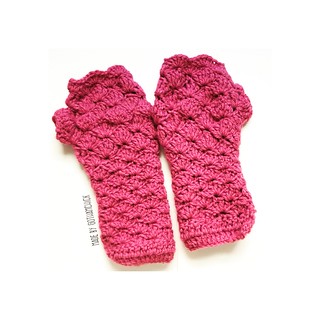 Pink hand warmers.  When fall came, I actually couldn’t remember where I put my leather gloves.  I did find my hand warmers, but only one of each pair.  I could pretend I was being funky and wear a different pink on the left and another on the right.  Besides, does anyone really pay attention?  (Yes, they do.  I know because I do.)  And again, maybe because of last year’s practice but I nailed this one despite the unstitching every now and then because I was working freeform using the fan stitch.  (Not quite sure that’s what you call it.)

At first I thought 30 stitches for the actual cuff was too tight, but then again, crochet stitches actually stretch as you pull on it this way and that. It worked well enough because I meant for the warmers to reach up to just beyond my wrist, and not all the way up my arm. That’s another project maybe for another winter.

I know it’s February and I’m going to start drafting my next post the moment I hit send.. more, more, more! 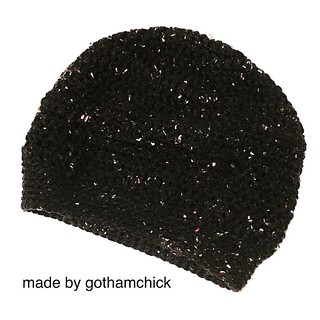 With Fall here and winter just around the corner, the temperatures have started dropping and we’re pulling the coats out of the closet along with the usual cold weather accessories that we all don this time of the year.  If you’re like me, there’s the perpetual search for the right head gear that will keep you warm and not give you the dreaded “hat hair”.

Last year, I resumed knitting and crocheting which led to a lot of craft experiments.  (Translated: I didn’t quite finish a project.)  A year later, I’m actually hoping to make better progress.  For starters, I’ve found a crochet pattern for a slouchy beanie which I hope I can finish and wear.  I have my coterie of crochet hooks in all sizes and quite the healthy stash of yarn.  I picked out a spool of tweed yarn this morning and started the so-called “magic loop”.  If it’s as easy as it’s touted to be, it shouldn’t take me long to find out if I’m going to make another one.

Choosing a hat can be quite the dilemma.  I have no problem with wearing beanies because I have a perfectly round head (being a c-section baby), but then I have a round face and my hair used to be perpetually short which wasn’t quite flattering underneath any sort of headgear.  That’s changed a bit now with my shoulder length hair.   I also quite like the look of slouchy hats which aren’t as snug on the top of your head, giving your head room — literally.  We will see.  I haven’t seen any slouchy hats to try on so I’m making one.

So for starters, I reviewed if I am doing my double stitch right and found that I have been actually doing an extra pull all these years.  This video was helpful in reminding me how it should be done.  The pattern only uses the single and the double stitch and switches between two crochet hooks but only at the end.  The increase in the stitches in the first 9 (original) and in mine (8) are pretty straightforward and a no-brainer to follow.

I started crocheting and finished this in less than a day, and I know I would’ve been able to finish it sooner if I wasn’t doing it during breaks only.  I followed the pattern to a T and used the two hooks specified, but the hat turned out to be too big.  Following the suggestion from JennyLikesYarn who authored the pattern originally, I undid the stitches to the rows where the increases stopped and am working on 64 instead of 72 total stitches in the final rounds.  This was the second to the last row before you worked without increasing the rows.  I am also trying to gauge how much of a slouch I want my final product to have.

Although the first was obviously too big, I liked the way the adjusted hat sat on my head and yet felt warm enough to cover my ears in a comfortable yet snug way.

This pattern is easy enough even for younger crocheters to take a stab at, and it’s a pattern you can do in various colors and dress up with a button or ribbon in unlimited ways.  I’m already thinking of how I can dress up the next version I make.  Just be warned that the size of the beanie changes not only depending on the hook you use or number of stitches per round you use, but the yarn itself.  The nice thing it’s easy enough to make and undo as needed, and you can tailor fit it according to the style you want.  More coming!!